I often say that I’ve been running marathons for 20 years. Last week, that was exactly, specifically and literally true. 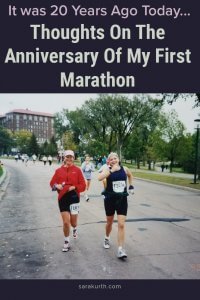 I’ve written before about how I became a runner (it was one of the first blog posts I ever wrote).

I won’t repeat myself here, but in summary, I wasn’t a runner growing up. I wasn’t even an exerciser. There was a half-assed attempt at JV volleyball, and a few 5k fun runs peppered throughout my youth, but nothing stuck.

I can’t remember what exactly made me want to run.

My mom was a marathoner. I’d cheered her on at a few races and volunteered at the Chicago Marathon one year when she ran. I found that to be totally inspiring, but in a more generalized, I should run a marathon sometime, kind of way. Not in a specific, I’ve been moved to head out the door today, kind of way.

In my retelling of it, I say I was tired of being a slug, so I started running. But truth be told, I was never a slug. I wasn’t terribly active, and I’d never followed a specific exercise plan for more than a few weeks, but I was never a slug.

Whatever the reason, in 1998, I decided that my Mother’s Day present that year was to train for and run the Twin Cities Marathon with my mom.

That gave me about 6 months to go from non-runner to marathoner.

What Have I Gotten Myself Into?

Like so many first time marathoners, I wasn’t entirely sure what I was doing.

I didn’t know what I was in for.

As I recall, I got a training plan out of a Runner’s World edited book and followed it religiously.

When I lined up for my first big training race (the Cities of Lakes 25K), there were more than a few glimmers of ‘there is no way I can do this…’ running through my head.

But I did that race. I did my first 20-mile long run. And before I knew it, race day arrived.

I don’t remember much about that first marathon.

The most vivid race day memory I have was near an aid station by Lake Harriet, a lake I ran around a ton in training.

And I realized they were talking about me.

It was the first time I ever thought of myself as a marathoner.

Heck, it was likely the first time I ever thought of myself as a runner.

While I’m no longer a spring chicken, there aren’t many times when I can put on my ‘back in my day’ hat and talk about how things used to be.

Marathon running is one of the few areas where I remember how it used to be.

There were no timing chips. You got your finish (gun) time, and you had to estimate how long it had taken you to cross the start line.

There was no GPS technology. If you wanted to know how long a run was, you got in the car and drove out the route.

There was no GU. It technically existed at the time, but it was another 5 or so years before I ever saw it in the Midwest. PowerBars were the thing for run fueling. And they only made the pressed-cardboard tasting OG PowerBars.

Although I do remember the Vanilla Crisp ones weren’t that bad.

The idea of carrying your own water was a little wacky. There were waist pack hydration systems, but they were clunky – not the streamlined and ergonomically correct versions are around today.

Finisher shirts were cotton and finisher medals were fairly small and subdued. The arms-race of one-upmanship to have the biggest triple-spinner finisher medals around was another decade off. 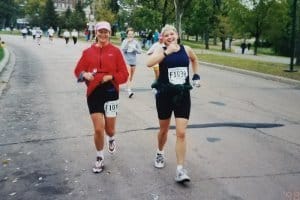 After my first marathon, running didn’t stick as a habit right away.

I didn’t run my second marathon (Las Vegas- the old version that ran on a frontage highway in the desert) until 2002. I’m sure that is in part because I lived in Minnesota at the time.

Brutal winters were no match for my still-in-its-infancy running habit. There was no way I was running on a day so cold it would freeze my water bottle.

But by 2002, I’d moved to LA. The ‘it’s always 70 and sunny’ cliché is mostly true, at least on the West Side where I lived. 70 and sunny in January made the running habit stick a lot stronger.

And this time, it stuck for good.

I’ve run a marathon or two pretty much every year since.

Heck, running marathons as training runs for ultramarathons. Acting as a pacer on race day. Working as a running coach, helping other new runners finish their first marathons.

My gut reaction is to think she’d be shocked. How could what was basically an impulse decision one random spring day impact everything I do from that day forward?

But really, I’m not shocked.

I don’t even think I’m surprised. Running marathons and training for marathons (and yes, they are different things) suits my personality and my temperament.

I’m a scheduler and planner. I love that on day 1 of marathon training, I know what runs I’ll be doing every day for the next 18 weeks. And once it’s in my calendar, I’ll follow the plan to the letter.

It’s just in my nature.

And while I’m not a fast runner, I am persistent. That fortitude is perfect for a marathoner.

Both 20 years ago and today, I’ll often doubt that I can do it.

I’ve finished 29 marathons, and I still stand at the start line and wonder if I can do it.

But deep down, I know I can do it.

I can run marathons.

I can face new challenges.

Terrible races in the midst of hail, or heat waves, or earthquakes, are fodder for post-race storytelling, not obstacles that will stop me.

However, some things never change. I still get into moody, post-run funks. I’m still not a pleasant person to be around the last week of the taper.

I still haven’t found a way to make that go away.