Trail running can be truly amazing.

But trail running can also be a little intimidating for newer runners or even for experienced runners who have never been off the roads. Trail running will get you out in nature and into some of the most beautiful parts around, but it can be more wild and unpredictable than the roads.

Don’t be afraid of trail running, but be safe and prepared with a little knowledge and some advance planning.

I am not a terribly klutzy runner, and yet the idea of tripping crosses my mind on pretty much every run- road or trail. Bad sidewalks have caused me more skinned knees over the years than tree roots, but there are many potential tripping hazards on almost every trail.

Sort of related: I am also convinced that at some point I will step on a banana slug and their slime will cause me to fall banana peel-style. I’m not sure what that says about me, but I haven’t had a slug-induced mishap (yet).

The biggest prevention here is to pay attention to your surroundings and your footing. Trail running is not the sport for you if you want to put in headphones and zone out. You have to pay attention on the trail.

Always pay attention. The worst spill I have ever taken (my first literal face plant) was on the flattest section of a course. The spill was largely because I had stopped paying attention. It was the smallest pebble around that got me.

You can also start with crushed gravel trails or fire roads for your first few outings to get a feel for the different surfaces before moving on to single track trails. Single track trails are more likely to have crazy roots, rocks, and uneven surfaces. [read more about trail surfaces in an earlier post]

All that said, also don’t get overly obsessed with the idea of tripping and falling. I did a race recently and overheard a group who spent the first mile and a half pointing out every tree root to each other and talking obsessively about how sure they were they were going to fall. Be aware of the possibility, pay attention to your surroundings and your footing, but also don’t obsess about it.

Don’t put that kind of negative mojo into the universe.

I’ll break this down into two scenarios: running on your own and during a race.

Get, and carry with you, a paper map of the area where you will be. An old school paper map! GPS and cell phones often don’t work on the trail or under tree cover, even in fairly urban areas. Learn to read maps if you haven’t [read more about my adventure re-learning map and compass navigation]. 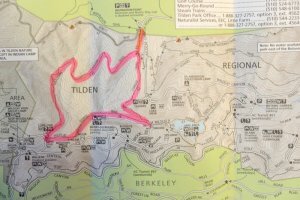 Plan your route in advance. Trail running, especially for newbies, is not the right time or place for exploring random pathways.

You can start with a wider, more obvious fire roads or multi-use trails your first times out as you get a hang of reading the map and wayfinding.

If you are doing an out and back course, look backward at intersections, it may look different going the other way.

I don’t follow my own advice here, but: it’s not a great idea to run trails alone. It’s safer (in every sense) to be in a group. But I often run trails alone, so do as I say, not as I do. If you will be alone, at the very least let someone know where you will be and when to expect you back. That I do.

Every trail race I have done marked the course with colored flags or ribbons. Find out how your course will be marked.

This information is usually on the race website and/or in the pre-race runner information material. Even if you read it on the website, listen to the pre-race briefing in case anything changed. 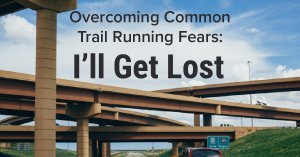 Finishing last in a race

I say this as a runner who was convinced that I would finish last every race I entered for the first 5 years of running: So what?

Not to be (too) glib, but as someone who has finished last (and next to last), I guarantee that nothing bad happens to you when you come in last. One trail race company in the Bay Area even has a special award for the person who comes in last.

This is one big advantage trail races have over road races: without as many traffic concerns, trail courses are generally open much longer than most road races.

If you are really concerned about finishing last, look for shorter races that have marathons or ultra marathons being run at the same time. Courses with ultra marathons will often be open and aid stations and finish lines staffed for 8 hours or more. That gives you a ton of wiggle room on your finish time for even the slowest paces. Even if you are last in your event, you won’t be the last one to cross the finish line. 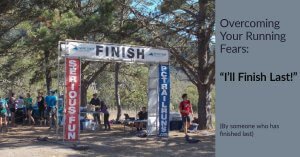 If you didn’t pick up on my (not so subtle) theme, the main preventive measure you can take on the trail is to pay attention! Know where you are and what you are doing.

And remember to stop occasionally and enjoy the view.

Do you want to try the trails, but some fear is holding you back? Is there anything I have forgotten to address? 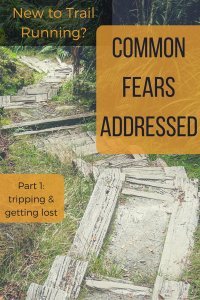