I love true crime podcasts and I love trail running.

Usually, these are two fairly innocuous past times that don’t interact with each other. But this past weekend, I was doing a 13-mile solo trail run. Fine. I was also listening to podcasts. Fine.

I was about halfway through the run when I realized that my entire podcast queue to that point had been true crime. My podcasts play in the order they were released – newest first – so this wasn’t intentional. By the time I was done, I’d listened to nearly three hours of murder and mayhem.

Having nothing else to think about on the run and a constant stream of stories about serial killers in my ears, I got myself a bit worked up and more than a touch paranoid.

I’ll leave aside the cultural conversation about the true crime genre or why the audience is mostly middle-aged, middle-class white women (a demographic I fully represent), and simply indulge my occasional walks on the dark side via true crime podcasts. 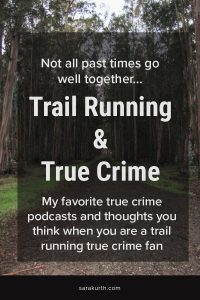 My true crime love these days falls mostly on podcasts.

I originally got into true crime via books. And to this day, I’ll occasionally have jags of watching too much Discovery ID, but increasingly, if I’m going to read or watch something, I want that content to be higher-quality than most true crime books and TV tends to be.

But podcasts? Those I’ll listen to for hours on end – as my run last weekend proved.

There are a few subgenres within the true-crime podcast world and every listener has their favorites. There are the chatty, ‘the crime is just the jumping-off point for talking about wacky stories from our lives’ ones (these feel wrong to me- I don’t mind the occasional off-handed funny comment or observation, but I don’t think someone getting murdered is the time or place for wacky). The ones that basically only read the Wikipedia page (I don’t need my hosts to be full-on investigative journalists, but at a minimum, do a Google search). And my favorite, the well-researched ‘just-the-facts’ ones.

For my true crime, I don’t need all the flourishes and fluff. The stories are usually dramatic enough as is (incidentally, this is the same reason I hated the movie Titanic– the story is dramatic enough without Billy Zane running around with a gun, but I digress.)

Casefile is from Australia and hosted by a man who steadfastly remains anonymous.

They present an interesting combo of cases from around the world, covering mostly solved cases, but they’ll occasionally throw in an unsolved case.

1 new episode on (most) Saturdays

Two white guys yakking at each other? Hardly groundbreaking for a podcast. But still.

According to their site, the Generation Why hosts ‘discuss theories and share their opinions on unsolved murders, controversies, mysteries, conspiracies, and true crime.’

They cover mostly American cases. I like that they have opinions about the criminal justice system, and they raise those opinions when relevant. However, they are still able to present cases in a (relatively) unbiased way.

Red Handed is the most ‘chatty’ true crime podcasts I listen to. They mostly stick to the story, but will occasionally go off on a tangent, but never too long before returning to the story.

An acceptable ratio in my book.

They’ve had some plagiarism issues in the past which has made me a little less of a fan, but by all accounts they are addressing their sourcing issues.

Thinking Sideways has since ended, but the back catalog is still available.

They covered all things unsolved. Unsolved crimes, but also conspiracies and disappearances. I like that they reviewed all the possible theories, no matter how absurd, but never failed to point out the absurd theories for what they were.

No new episodes, but several years of episodes in the archive

On my almost-exclusively true crime-filled trail run last week, my mind started racing with every rustling bush (was the noise really just a rabbit in the undergrowth?). I started thinking about the one other car in the parking lot at the trailhead (surely it belonged to a serial killer…).

By the time I got back to my car (the trailhead parking lot now filled with cars), I’d come up with a whole list of signs you may be both the trail runner and true crime addict: 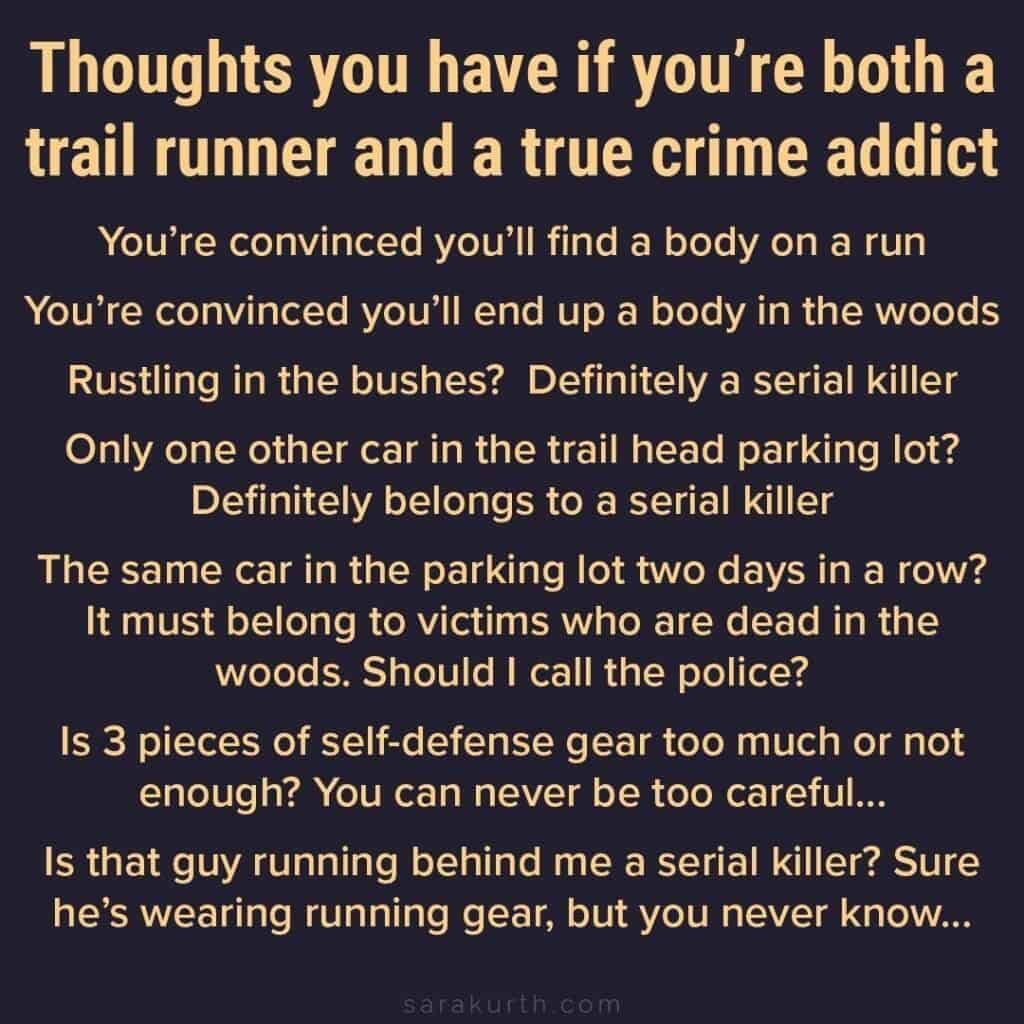