This Year, I Am Thankful…

I’ve Stuck With Writing And Blogging

I’d toyed around with blogging and writing at several points in my life.

I’d consider ideas for blogs in my head (ideas are always amazing when they are in my head!), but then I’d actually start writing. The posts were never as good in reality and I’d get discouraged. My writing efforts were over nearly as fast as they started.

If I wasn’t immediately amazing and perfect, what was the point of doing it?

Or I’d start looking into the technical side of things and get immediately overwhelmed by how much I don’t know.

But this latest blogging incarnation has stuck. I’ve accepted that my first drafts of posts still suck, but that’s what editing is for. I stayed with it and my writing has gotten better, I’ve improved. I’ve begun to develop my voice and trust myself.

I’m still a work in progress, with tons of room for improvement, but I’ve gotten through the starting phase which is often the hardest part.

I’ve started to enjoy the process and love the act of writing.

I’m forever thankful I’ve been able to reach people and help people with my writing and this blog.

It helps that I’ve found several blogging communities for accountability and support. Never underestimate the power of connecting with others who understand what you are going through.

My big goal this year was to start a YouTube channel.

I don’t know why I wanted to do video, but I simultaneously couldn’t get the idea out of my head, and never had the nerve to pursue it.

I started my channel early in the year (I love when annual goals are met in January!) and have been posting videos weekly. My videos may not be the slickest around, but they are improving, which is all I can ask of myself.

I’ve learned so much (that seems to be my theme of the year)!

Being the cliché of the person who always hated seeing themselves on camera, just the fact I’ve been willing to step in front of a camera was a huge step. In large part, the whole video experience has been a practice in letting go of perfection. Putting my (hopefully) helpful ideas into the world and trusting people will accept me (and my video production skills) as I am.

I don’t have an endgame with my videos – I don’t know what I want to accomplish in the long-term, and I’m OK with that.

Sometimes, you just need to pursue something you can’t get out of your head, even if it’s only for your own amusement.

A few years ago, I was looking for the going rate for dog walkers in the Bay Area (I was going to be walking a friend’s dog for a few weeks and had no idea what to charge). A few random Google searches later, I came across the website of Hopalong Animal Rescue, an animal rescue organization here in the Bay Area.

They were opening a new cat adoption center about a mile from my house and they were looking for volunteers (actual position name: kitten cuddler).

Why not? I thought. I’m a homebody by nature, so it can never hurt to force myself out of the house occasionally.

Over 2 years later, I’m still volunteering there twice a week.

And the position title is accurate. While there is some cage cleaning and litter scooping, the majority of the shifts are playing with (and cuddling) kittens, helping them find forever homes, and facilitating their adoptions.

I don’t care how bad of a day I’m having, 2 hours taking care of kittens never ceases to brighten my day.

Another long thought about and often procrastinated on goal, was to launch an online coaching business.

I’ve been a certified running coach for several years, and have been a volunteer coach for my local running club for more years than that. I’d toyed with the idea of launching an online coaching business for years, but like blogging and video before it, the moment I began to consider the details and the logistics, I’d panic and come up with reasons why now isn’t the right time.

But eventually (also like blogging and video before it) I got sick of thinking about it and took action. I was lucky to have a few guinea pig clients who were willing to put up with me while I set things up and learned the ropes of online coaching, and just like that, Puffin Coaching was born (hatched?)

I’m honored my clients trust me with their goals.

I love I’m able to help them so directly (even if it is virtually).

And I find I’m more proud of my client’s accomplishments than I am of my own.

The Response To The Northern California Fires

OK, stick with me on this one…

I’m not thankful the recent wildfires in Northern California happened (of course). They’ve been horrible and tragic. So many people have died or lost everything. It has produced hazardous air conditions, forcing us all inside for several weeks and canceling races.

The response has been amazing to see.

The terrible circumstances have resulted in a huge desire to help. There’s been an overwhelming outpouring of donations and assistance.

I was volunteering at two races that had to be canceled due to air quality, in one case just minutes before the start. What could have generated anger at the months of lost training (the races were 50ks and 50 milers, so the runners had been training for months), instead produced understanding runners who donated their entry fees to fire relief instead of getting a refund.

The animal rescue agency I volunteer with has taken in dozens of animals from fire zones and has been overwhelmed with support and donations (but are always looking for more).

There’s so much hostility and division in the world today. So much us v. them and attempts to get more at the cost of others.

It’s been moving to see such a united and positive response. 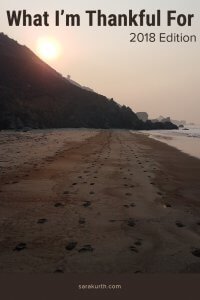