Sadly, this post could alternatively be called: ‘A list of things I’ve done after long runs and later come to regret.’

What Not To Do After A Marathon Training Long Run

I do more of these things than I should admit.

Consider this post a case of do as I say, not as I do. 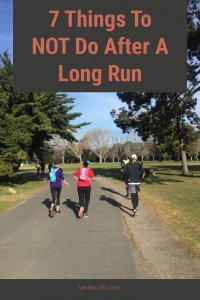 Be A Couch Potato

It will be tempting to do nothing after a long run. After all, you’ll be tired and you’ve earned some rest, right?

If you sit on the couch and don’t move, your muscles will tighten up.

You will really regret it when you have to move again.

Not Refuel or Rehydrate

I’m often not very hungry when I finish running. By the time I finish stretching and cooling-down, I’ll often forget to eat.

After your run, your body will be depleted. Even if you’ve fueled well on the run, your body’s stores of carbs, glycogen, protein, and water will all be running low.

In order to rebuild the muscles that you’ve broken down on your run, refuel.

My apologies for TMI, but I am a super sweaty runner. I could run 100 yards in near freezing temps and I’d likely break a sweat. Can you imagine what I look like after a long run?

I’m often far from home for my long runs, or running with a group where we may socialize or brunch after we’re done running.

All that to say, I often find myself staying in my running clothes way longer than I should.

It can be very bad to stay in sweaty running clothes when you’re done running. It creates all kinds of bacteria and fungus issues.

Staying in damp clothes can also make body temperature issues worse. After a long run, how can I be freezing and roasting at the same time? I have no idea, but staying in damp running clothes doesn’t help.

This one has never been a problem for me personally, but I know some people struggle with it: after a marathon training long run, you need to let your body recover.

Leave the track work and speed work for a few days after a long run.

OK, not those things exactly, but anything requiring brain power.

Runner’s Brain is a very real thing. The glycogen that fuels your body also fuels your brain. As you run (and your glycogen is depleted) your brain may get a little fuzzy.

I can usually feel myself starting to get stupider around mile 14.

After your run, your brain may stay a little fuzzy while your body refuels.

Have That Important Conversation

Related to not doing brain surgery, don’t do anything that requires (or potentially requires) emotional control or restraint.

Again, you’ll be emotionally and physically exhausted. When that happens, it can be hard to control your emotions.

You don’t want to have to apologize for something you said to your spouse while exhausted after a long run.

Don’t Give In To Cravings

There is even a name for this: hedonic compensation. Rewarding yourself for doing something virtuous.

I can’t in good conscience advise you to not treat yourself.

I know the ‘right’ fitness advice is to not use food as a reward for fitness accomplishments, but I know, after years of trial and error, it is one of the few rewards that consistently works for me, so I do it.

Rare is my long run that isn’t rewarded by pizza, a can of coke, and/or a cupcake.

What about you? Is there anything you know you shouldn’t do after a long run? 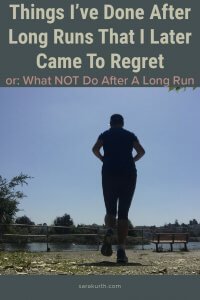