The focus so often falls on the champions. There is no shortage of stories about the elites. The winners of this race or that.

About how they train and what they think about when they run.

I enjoy reading these articles. I occasionally take some piece of advice or another from them.

Their lives, their training, and their running experiences are just too different from mine.

The reality of an elite runner just doesn’t resemble my reality.

Sure, we are both ‘runners’ but their 100 mile weeks, track work done at speeds I can’t comprehend, and their strict paleo/vegan diet (paid for and cooked by sponsors) doesn’t connect in my head as related to the same activity I do, with my 30 mile weeks, 10:00 min/mile pace and my diet of not-always-so-great foods eaten on the way from this meeting to that.

I can’t relate to the experiences of the elites in that visceral way that drives real motivation and change. 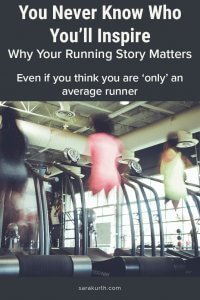 What About The Also-Rans?

Personally, I think I can learn more from the runner who always comes in 20th or whatever random place. They know they aren’t going to win.

They aren’t working to be the best.

They are working to do their best.

They work to overcome their demons.

They keep pushing, even when they know they aren’t going to finish first

That is a mindset I want to know more about.

A mindset I can learn from and be inspired by.

We often discount our accomplishments.

But every story is important.

Everyone is inspired by, and moved to action, by something different.

You Never Know Who Is Watching

Some runners (or would-be runners) are inspired to action by looking to elite runners.

But others look to those whose experience more closely resembles their own.

They may be more motivated by someone who is one or two steps ahead of them on the journey than they ever would be an elite.

You never know who you’ll inspire.

Maybe you aren’t the fastest. But you’re still out there and that may be just the inspiration that someone who was previously too intimidated to run needs to get out the door.

Maybe you are (‘only’) a back-of-the-pack runner finishing just ahead of the sag wagon. That can be way more inspiring to someone who has never run than the winners of the race could ever be.

They can see themselves in you.

They recognize your struggles and your effort.

Your reality resembles their reality, and that may just be what they need to finally get started.

Embrace yours. Embrace your running journey and the power it may have.

Share it with others, even if (especially if!) you think you are ‘only’… whatever.

Your story, while maybe still a work in progress, shows you are trying.

And you never know when that will encourage or resonate with someone else.

Maybe it’s your co-worker, whom you barely know, but who has always wanted to do a 5k.

Or maybe it’s your kids, who see you setting a good example of a healthy and active setter of goals.

You never know who you may inspire.

Your story has meaning. 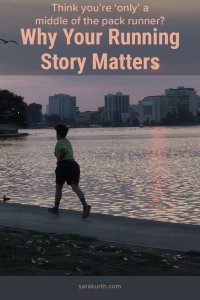