I haven’t run many races in the winter the past few years. I’m a coach and pacer for my running club’s marathon training program and we focus on March’s Oakland Marathon as the goal race. This means we have group long runs nearly every Saturday from Thanksgiving through the end of March.

I take my role with them seriously and don’t like to skip group runs. As a result, I only have a few run-on-your-own weeks where I can run whatever I’d like on Saturdays. For the most part, I don’t mind this – winter is cold and rainy. Usually not great for trail running.

But this year, I decided on a winter ultra (why did I do that again?), so I need to get a little more time in on the winter trails. 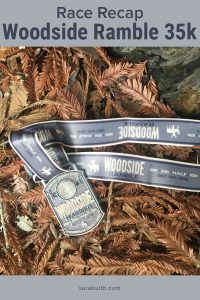 Woodside is down in the Peninsula, an area I know has a ton of great trails, but that I don’t get down to all that often. It’s kind of a pain to get to. Or more specifically, it’s a pain to get back from – morning traffic isn’t too bad, but coming back, I hit both bad Peninsula traffic and bad East Bay traffic.

The Woodside Ramble 35k (which I keep thinking of as the ‘Woodside Scramble’) was a pretty last minute registration. I had free volunteer race entries to use, it was a run-on-your-own week with the club, and I was looking for 20-ish trail miles.

The stars aligned, and Woodside it is.

Or the lack of other race options this weekend pointed me to Woodside.

Either way, it was fun to head over that way for a change from my trail usual suspects.

I have zero expectations for this race. While I’ve done races in this park before, they’ve been on slightly different courses (although some of the course overlaps, namely the long out-and-back bit, more on this later).

This course has way more elevation gain than the Woodside races I’ve done before – Ramble has nearly 4000 feet of climbing, the other courses I’ve done in this area climb in the 2500 feet range.

The big question for race day is weather. Winter is the rainy season in Northern California. I can safely sign up for any race in the summer and know it will be dry. Even the last few years with the drought, it’s been pretty safe that it’ll be dry on race day even in winter. However, the rains have returned over the last few winters.

Great for the environment, not as great for planning winter trail races.

Either way it’ll be good practice for Salmon Falls. I knew going in there was a muddy, sloppy race risk attached to signing up for a 50k in Northern California in February. I need to be ready for it, so if it rains for Woodside (which is in the forecast), so be it.

The race day forecast said rain, but when that rain was supposed to start kept getting pushed back later in the day. In the end, race day was cool and grey with highs in the 50s. It actually was great weather for running.

The forecasted rain arrived, but not until after dark. 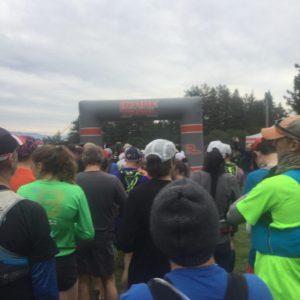 The Woodside Scramble (nee Ramble) is a basically a lollipop course.

We start at the top of the lollipop, run half a loop, then do a long out-and-back section, then run the second half of the loop. The out-and-back section is the bit I’ve done before at other races. It connects multiple parks and is used by many races to create longer courses in a number of local and regional parks.

The entire course is lined by redwoods, ferns, and moss.

It smelled really good too.

Mentally, I thought of this race as 4 parts: the first part of the loop, the out bit, the back bit, and the second half of the loop.

My mind was in a different place for each of these parts.

Part 1: The First Half of the Loop a/k/a THE LOUD TALKER

As Woodside started and we all fell into our respective paces, I got caught near the two loudest talkers ever.

If I had my way, trail races would be silent, but I know that’s absurd and even I’ve been known to chat with others.

However, these two not only never stopped talking THEY WERE TALKING SUPER LOUD.

I DID EVERYTHING I COULD TO EITHER GET BEHIND THEM OR IN FRONT OF THEM, BUT NO MATTER WHAT I DID, THERE THEY WERE.

THERE WAS NO ESCAPE.

I COULD EVEN HEAR THEM WHEN LISTENING TO PODCASTS WITH BOTH EARBUDS IN (a trail no-no which under normal circumstances I wouldn’t do, especially at a race, but desperate times…).

They stopped longer at the first aid station than I did, so I was able to put some distance between us, but I could still hear them a solid 10 minutes later. 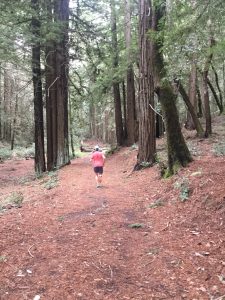 Even on trails, I tend to run pretty consistently. This is what makes me a good race pacer, and I know other runners occasionally use me as a pace rabbit even when I’m just at a race running as a civilian.

Sometimes I’ll get chatting to those behind me (see, I’m willing to talk to others on the run), if for no other reason than to make sure I’m not holding anyone up – I check in and make sure they aren’t trying to pass (I hate being the person responsible for holding others up).

They often say versions of ‘no, you are just running at the perfect pace for me.’

At Woodside, on the out section, two guys were running right behind me. I checked in with them to make sure they didn’t want to pass.

They insisted they didn’t and kept running behind me.

Fine in concept. Having people follow me like that is a good incentive for me to keep running harder and pushing myself. However… these dudes were right on my tail. Like often less than 5 feet behind me. If the one right behind me had fallen, he would have taken me out with him he was so close.

The old joke is  ‘I wouldn’t run unless someone was chasing me’. Well, that is how I felt for this 5ish mile section.

I kept thinking – you have all of the outdoors, do you have to breathe down my neck? 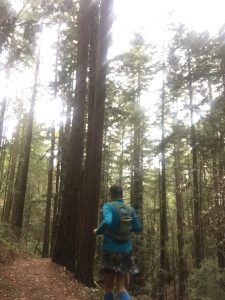 Eventually we hit the aid station that was the turnaround spot for the 35kers. Thankfully, the dudes who were tailing me were doing the 50k, so they kept running when I turned around.

I was blissfully unchased in this section.

This section was the exact same as the second section. Yet it felt like it took three times as long to finish.

How can the exact same course feel so much longer the other way? The elevation was rolling hills in both directions so it’s not like there was that much more climbing this way.

Maybe I just had too much time in my own head in this direction since I wasn’t obsessing about the dudes right on my tail.

Part 4: The Second Half of the Loop a/k/a This is the Course That Never Ends

At long last, I got the second half of the loop.

I was still feeling pretty strong and like I was doing a moderately competent job of running this distance.

I knew the official distance of the race measured longer than 35k (21.7 miles), but I couldn’t remember if it was 22 or 23 miles, so I wasn’t exactly sure how to measure/plan the last few miles.

My watch ticked over from 21 to 22 to 23 to 24, with no sign of an end (the official course measurement was just over 22 miles and my Garmin read just over 24 when all was said and done).

This is the course that never ends… and it goes on and on my friends… (any other former summer-camp goers know that one?)

Biggest… I Don’t Know What To Call It… Annoyance?

Woodside Ramble/Scramble also had a 50k race. The 50k runners did an extra out and back after we turned around.

The lead 50k runners started coming back as I was still going out on the out-and-back section.

I’m fine with my pace. I know I’ll be in the bottom third of runners on these super tough trail races. But being constantly reminded of how much faster many of the 50k runners are started to mess with my head and my confidence after a while.

It’s like being the least flexible person in a yoga class. I’m totally fine having that role, I just don’t necessarily want to be reminded of it regularly.

They were just a smidge faster.

I knew going in the course climbed nearly 4000 feet.

Looking at the map, I expected the worst of the climbing to be in the first quarter of the course. With the out and back bit rolling up and down and the last bit to be largely downhill.

In reality, the hills felt fairly evenly spread out. They were constant (flat sections don’t exist on this course), but the ups and the downs seemed fairly well balanced.

I felt great on this run, even on the hills.

I walked up some of them (I’m still me after all), but ran more of them than usual, thanks largely to trying to get away from first the loud talkers then the dudes right on my ass in the second section).

While maybe not the best reasons to running more, it was effective.

I basically came in last!?

This surprised me considering how great felt. This is a prime example of race rankings saying more about the people who I ran with than it says about me.

30 or 35k runs are always the least popular event. This is a tough course. Winter is always a slow season for racing, even in temperate Northern California. It was the weekend before Christmas.

Only a very particular cross-section of runners would be racing on this day, on this course. While I am as serious (dare I say hard core?) as those runners, I know I’m slower than most of them.

This is reflected in my finishing almost last.

Yes! I’d do this race again, or one of the other races that are in this park.

Like I mentioned, I don’t get over this way all that often, but there are beautiful trails to be run.

#flatsara is maybe ready for her last race of the decade tomorrow morning in Woodside. After travelling all week, im out of my normal routines and its not hitting me that i have a 35k trail race tomorrow. Good thing im viewing it as a training run with a bib number more than a race. #runitr #flatrunner #runallthetrails #woodsideramble